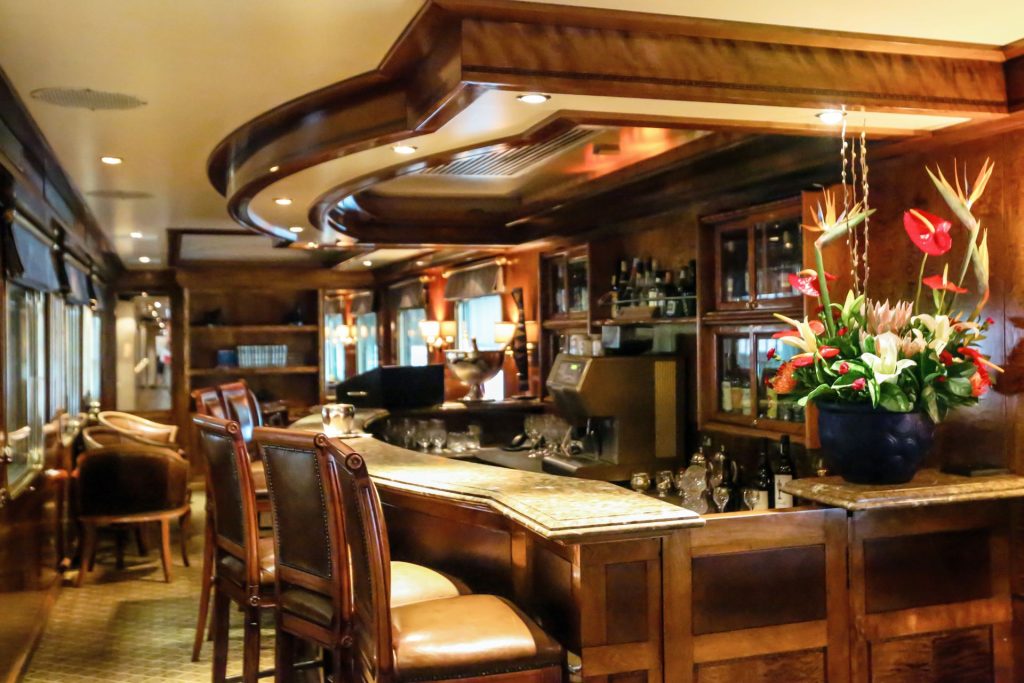 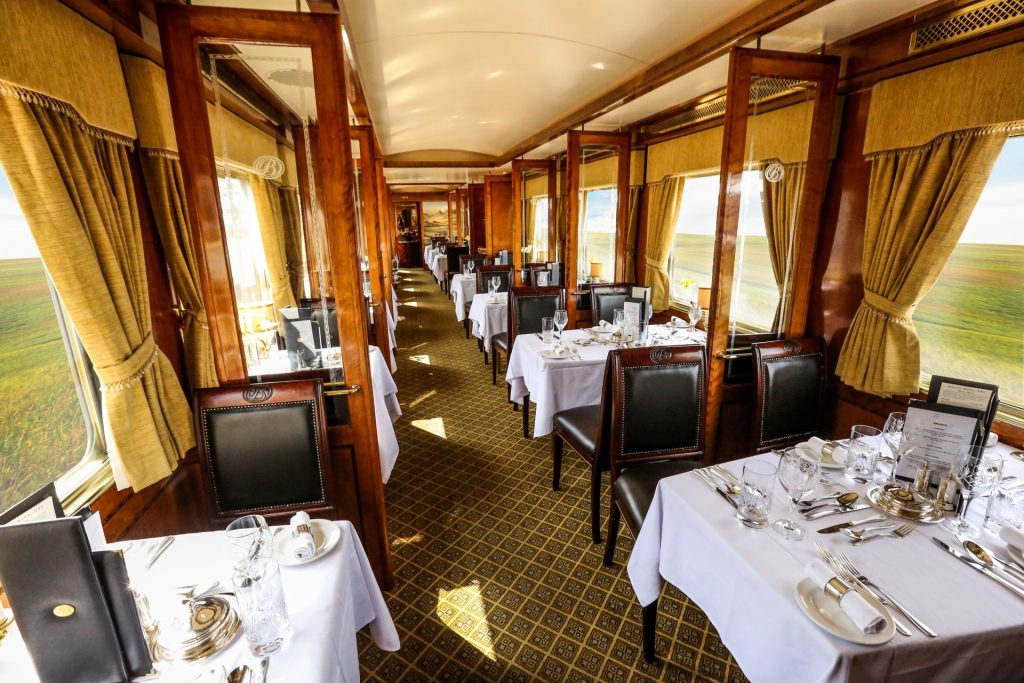 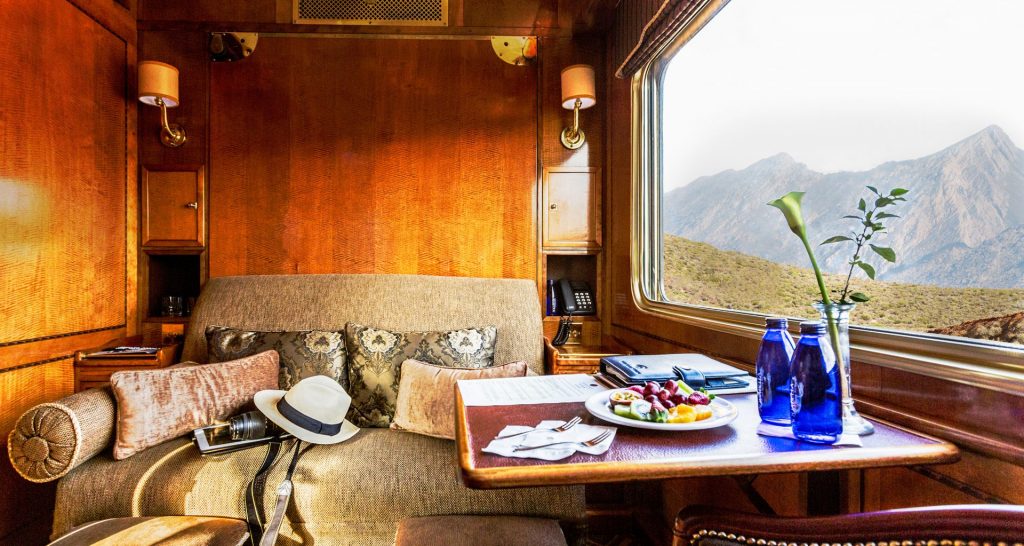 On This seven-day Indulgent Luxury South Africa with the Blue Train tour:

After arrival in Johannesburg one of Africa’s biggest and most vibrant cities. Transfer to Sabi Sand Game Reserve. Here you can enjoy a safari game drive. Followed by 3 days onboard The Blue Train which offers far more than just a journey. An all-inclusive experience offering a combination of unsurpassed luxury travel. Five star-accommodation, fine cuisine, personalized butler service and routes that offer breath-taking views of the countryside.

Finally, Cape Town resting at the confluence of the Indian and Atlantic oceans. Sandwiched between the slopes of the iconic Table Mountain and the glistening sapphire waters of Table Bay. The exceptionally scenic city of Cape Town is in a class of its own. Some cities boast rich culture, vibrant nightlife, a cosmopolitan atmosphere and extraordinary architecture, while others boast breath-taking landscapes and extraordinary natural wonders. Cape Town is lucky enough to be blessed with all these attractions. With its bustling harbour, world-class beaches, top-notch vineyards. With its mountainous surroundings brimming with diverse flora and fauna, Cape Town consistently captivates the hearts of all who visit.

Luxury or Deluxe Suite – chosen at time of booking.

De Luxe suites are ensuite and offer twin or double beds. The same suite is a lounge area by day and bedroom by night.

Luxury Suites are much larger and are the premier suites of The Blue Train.

Check-in Times: For the Cape Town and Pretoria routes, check-in is at 1200, two hours before departure. Guests can relax to a live performance and enjoy gourmet canapes.

Upon arrival at OR Tambo International Airport this morning and disembarking the aircraft you will be met and welcomed by a local representative for assistance through the immigration and customs procedure. The representative will escort you to the offices of the charter shuttle service from where you will take a scheduled, non-private charter flight to Arathusa Safari Lodge. Please note strict luggage policy applicable. Flight prices are any additional supplement to tour cost based on rate at time of booking. Arrive at the Arathusa Safari Lodge Airstrip where your lodge representative will meet and transfer you to the lodge. Check-in at Arathusa Safari Lodge in a Bush Facing Suite remotely located with your own private plunge pool. Arathusa Safari Lodge is unique and highly sought-after by visitors because of its prime location within the Sabi Sand Reserve, adjacent to the unfenced Kruger National Park. Together these two areas comprise one of South Africa’s most incredible and pristinely preserved wilderness sanctuaries. Enjoy afternoon tea and coffee followed by your first safari game drive in search for Africa’s Big Five.

Enjoy your safari experience at the lodge with morning and afternoon game drives on offer.
Adjacent to the Kruger National Park, the Sabi Sand Private Game Reserve is a private premier game viewing destination. It was the first ever private nature reserve established in South Africa. The landscape features 65 000 hectares of savannah-covered land interspersed with watering holes, dry river beds, lowveld woodlands, and the perennial Sabi and Sand rivers. This spectacular reserve offers exceptional game viewing opportunities with frequent sightings of the renowned Big Five as well as cheetah, zebra, giraffe, and a variety of antelope. Visitors can enjoy excellent wildlife viewing, dining under the stars, guided bush walks and enjoying a stay in some of South Africa’s most luxurious safari lodges

This morning enjoy your final safari game drive followed by breakfast and check-out.

Take a short transfer to the airstrip with your lodge representative for your scheduled charter flight to Johannesburg, OR Tambo. Once you have arrived in Johannesburg you be will met and assisted and transferred to Fairlawns Boutique Hotel. Check-in and freshen-up and enjoy the five-star facilities and amenities the beautiful hotel has to offer.

Following breakfast, check out late morning and meet with your local guide for a private, guided tour of Soweto. Soweto is a sprawling township on the south-western flank of Johannesburg. Soweto was created in the 1930s, with Orlando the first township established. With a population of over 2 million, the township is the biggest black urban settlement in Africa with a rich political history. Visit the Hector Pieterson Museum in Orlando West, Soweto, built in memory of the people who died that day, 16 June 1976. Nelson Mandela’s humble little house in Orlando West, Soweto, now called the Mandela Family Museum, is an interesting stopover for those keen to imbibe a slice of authentic history on the world’s most famous former prisoner. You can also have a glimpse of the mansion belonging to Winnie Madikizela-Mandela in an affluent part of Orlando West. Archbishop Desmond Tutu’s house and the Sisulu residences are in the same neighbourhood. Tour includes, private vehicle and guide with entrance fees for Hector Pieterson Museum and Nelson Mandela’s House. Transfer to Pretoria Station and check-in at the Blue Train Lounge. Depart on the luxury Blue Train from Pretoria – Cape Town around 16.00pm. Once onboard afternoon tea is served. Then you have time to change for dinner which is followed by post dinner drinks cognacs and Cuban cigars.

Breakfast is served between 6am and 9am. After breakfast there is an off-train excursion to Kimberley Open Mine Museum before returning to the train for aperitifs and lunch. Then you have time to admire the great views before afternoon tea and dinner.

Upon conclusion of your Blue Train Journey, you will arrive at Cape Town Station where you will be met by a local guide and enjoy a private, guided city orientation tour of Cape Town. Your local guide will point out historical landmarks and provide interesting facts and information on the history of Cape Town and its people. The tour will include a walk through the beautiful Bo-Kaap with its cobbled streets and a visit to Table Mountain, one of the Seven Natural Wonders of the World. Tour includes, private vehicle and guide with Table Mountain return ticket and a glass of sparkling wine on the top of Table Mountain. Table Mountain is weather dependent. Next a short, private transfer to the V&A Waterfront for your stay at Dock House Boutique Hotel. A stone’s throw from the alluring V&A Waterfront, located alongside the Time Ball Tower, Dock House Boutique Hotel offers the ideal balance between convenience and complete privacy. Chandeliers and ornate ceiling cornices, among other fine touches, create a sense of Victorian charm and allude to the property’s historical roots, originally the Harbour Master’s private residence in the 1800s. The hotel offers an excellent location at the V&A Waterfront with many lovely restaurants and shops to visit.

Today enjoy a private, guided awe-inspiring tour to the towering headland known as Cape Point. Magnificent beaches, breath-taking views, historic and picturesque coastal villages are to be seen along the way. The Cape Peninsula is one of the world’s most scenic areas and stretches from the City centre to Cape Point. Travel along the Atlantic Seaboard via Sea Point, Clifton and Camps Bay, stopping at a Llandudno look-out point before continuing to Hout Bay, a quaint village and fishing harbour with magnificent mountain views and beach. On through Chapman’s Peak, one of the world’s most breath-taking coastal drives, to Cape Point and the Good Hope Nature Reserve, which has magnificent fynbos vegetation, birdlife, endemic antelope species and zebra, historic lighthouses and shipwrecks. Cape Point is perceived to be the meeting point of the Atlantic and Indian Oceans. After lunch at a nearby restaurant (not included in cost), we go on to historic Simon’s Town, a village with charming Victorian architecture, a naval base and a large penguin colony at the beautiful Boulders Beach. Boulders Penguin Colony (included in cost) is home to a growing colony of the vulnerable African Penguin. Wooden walkways allow visitors to view the penguins in their natural habitat and there is also a new information centre. Return to your hotel late afternoon.

Would you rather? See a lot of places or get to

Do you prefer? The city or Nature? Looking to t

DEALS OF THE WEEK with easyJet holidays! From fam

Amazing offers, departing from the U.K. this sprin

I received an email from my clients when they retu

The world’s wonderful wildlife One of the best 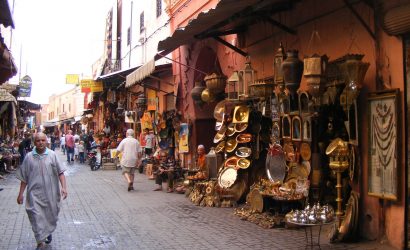 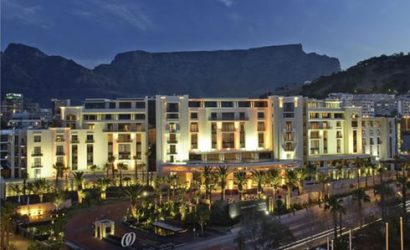 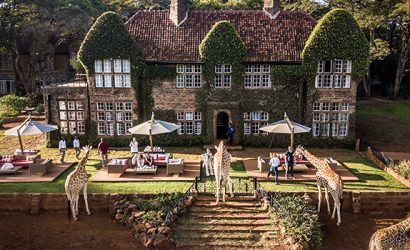 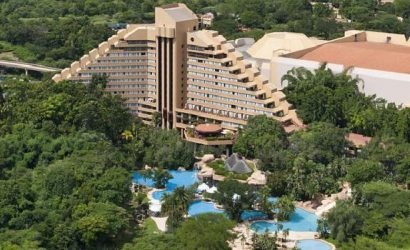 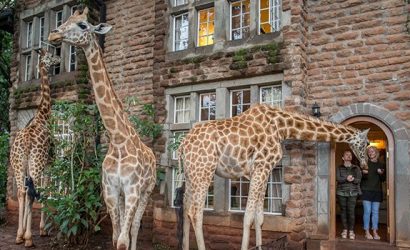 Giraffe Manor with Safari and Beach 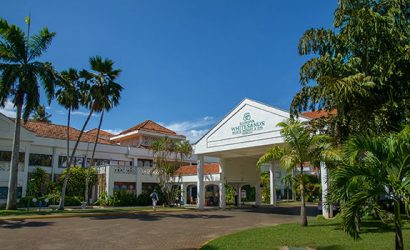