Home>Blog>Blogs>Pools & Spa’s of the World

From the geothermal Blue Lagoon in Iceland to the Devil’s Pool atop Victoria Falls in Southern Africa.

Pools & Spa’s of the World

Blue Lagoon is one of the most famous spots on an island known for its gorgeous and mystical geothermal features. Super-heated water vented from the ground near a lava flow feeds the pool. A nearby geothermal plant renews the lagoon every two days through a combination of natural and artificial filtering. Water naturally heated beneath the earth’s surface and takes in minerals on its way to the lagoon. The water, which stays at about 100 degrees Fahrenheit, is rich in minerals like silica and sulphur, and some people claim it has healing powers for skin diseases like psoriasis.

The Golden Nugget casino’s pool may take top honours as the scariest of the strange pools. The pool gives you the feeling of swimming with the sharks, without actually swimming next to them. The pool wraps around a giant tank for marine life that cost nearly $30 million to complete. It includes a three-story water slide that runs through the middle of the tank. Don’t worry: There’s clear glass between you and the sharks.

Jutting out into the Indian Ocean from a tiny island in the Maldives, this luxurious pool belonging to the Conrad Maldives Resort and Spa is in the class known an “infinity pools,” which are designed to dissolve the edges of the pool and make you feel like you’re floating atop the ocean itself.

At the Ubud Hanging Gardens in Bali, swimmers get two exotic choices: Overlook the valley from the swimming pool on high, or get into the thick of things in the lower pool among the terraced gardens. Either way, it’s clear that you’re going to have a swimming experience unlike any other you’ve had before.

The Library resort on the famous Koh Samui beach in Thailand is packed with dramatic scenery, but the blood-red pool stands out the most. The blood-red effect isn’t from dyeing the water, so there’s no risk of turning red after taking a dip. The colour comes from the combination of red, yellow and orange tiles from which the pool is made.

The white terraces inside these pools are enough to take the first-time visitor’s breath away. The bright white calcium and limestone deposits act like shelves buried in the water. Much like the Blue Lagoon in Iceland, the pools are praised for their healing powers because of the abundance of minerals in the water.

Badeschiff in German means “bathing ship,” but this ship is actually a shipping container. The Badeschiff opened in 2004 to give Berlin’s citizens a sanitary swimming environment near the Spree River, which is much too polluted to take a dip in. The Badeschiff stays open until midnight, and when the sun goes down, the operators deploy a cover over the pool to keep swimmers warm.

Atop Victoria Falls in southern Africa, one of the largest waterfalls in the world, is one of the scariest pools in the world. In the natural formation called Devil’s Pool, swimmers can look over the falls in relative safety as thousands of gallons of water from the Zambezi River plunge 128 meters into the gorge. At the edge of the pool, there is a rock wall that prevents the river from pulling swimmers over the edge. But jumping in is still a harrowing experience for first-time visitors, who can’t see the protective wall from the shore.

Pools & Spa’s of the World 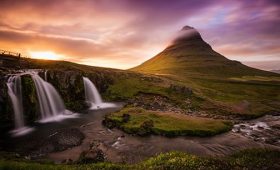 Where to See the Northern Lights 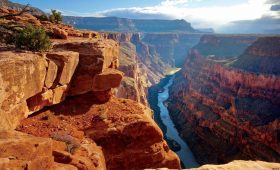 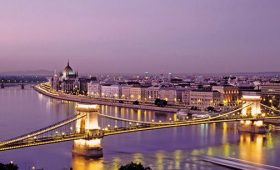